We know that people want to purchase remodeled homes that they can trust, and our community has many old houses that need love. New Again Houses was founded in 2008 to solve these problems. We began in a small office flipping a few houses each year. After the housing crash, we also began offering free consults to help buyers get qualified to purchase and access grants through licensed lenders. Along the way, our professional team has invested well over $15,000,000 in local properties and helped hundreds of buyers’ dreams come true. 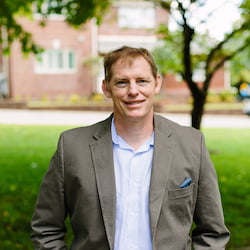 Matt Lavinder founded Lavinder Development in 2007 while an Assistant Professor, Assistant Athletic Director and Head Men’s Soccer Coach at King College. He has been rehabbing properties ever since and left King to run the company full-time in 2010. Matt has a Master’s of Divinity degree from Duke University (1999) and a Business degree from King College (1995). He enjoys finding creative solutions to real estate problems and transforming neglected houses into great homes. He is active in the community through Emmanuel Episcopal Church and FC Dallas TRI soccer club. He is married to Dr. Hollie Lavinder, who is a clinical pharmacy specialist for Advanced Home Care. The two have been married since 1999, rehabbed their first house in 2002, and have three children, Corey, Laura Jess, and Lana.

Sam Ferguson is originally from Knoxville and graduated from King College in 2010 with a degree in Business Administration and as a member of the Snider Honor’s Center. He was also an Academic All-American soccer player at King. Before joining the company in 2011, Sam spent time in Zimbabwe working with a non profit organization called Lasting Impressions. He returned to be an Assistant Construction Manager with Empire Construction. Sam is now involved in every area of operations and manages all construction and purchasing. He is married to Sarah Ann Ferguson, who is a Family Nurse Practitioner, and they have two sons, Cedar and Carson. 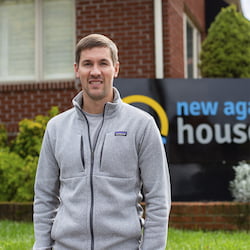 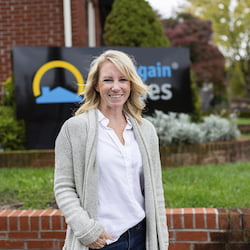 Annie Elliott joined the New Again team in 2014. She graduated from King College in 2006 and went on to get her MBA and comes to New Again Houses from Bristol Motor Speedway where she was the Corporate Sales and Campground Manager for seven years. Annie leads the design of our remodels, while also managing the back office finances and project management. She brings a unique mix of creative energy, style and administrative skills to the team. Annie is married to Brian Elliott, a P.A. at Appalachian Orthopedics, and they have a daughter, Finley, and son, Bo.

Blaine Hutchinson moved to the New Again Houses team from a management position at Lowe’s. Prior to Lowe’s, Blaine served in the United States Marine Corps from 2007-2011. Commenting on his experience in the USMC, Blaine says, “The USMC really shaped me as a person and remains one of the greatest personal achievements and experiences I ever had.” Blaine brings a deep passion for solving problems and helping people. He is the first contact for most of our clients. He gets people started on the road to home ownership by trying to understand what they want in a home and any obstacles we need to help overcome. Blaine is married to Sarah Hutchinson and they reside in Virginia with their three dogs and three children. 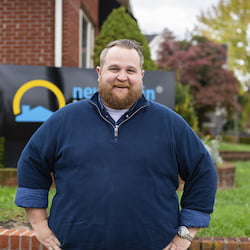 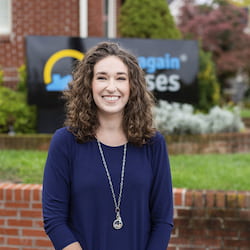 Jessica joined the New Again Houses team in September 2021 as a Junior Staff Accountant. She is originally from Wise, VA where she graduated from UVA-Wise in 2016 with a BA in Accounting and Business Administration. Her career began through a Quickbooks customer service role with Intuit and later went on to work at the K-VA-T Corporate Support Center in Abingdon, VA. During her three years at K-VA-T, Jessica gained valuable knowledge and experience in Accounts Payable and Accounts Receivable. She will be filling her role with NAH by handling the daily banking functions and other accounting related responsibilities. She will also be overseeing all the accounting operations and payroll at the newly acquired Bristol Sportsplex. Jessica enjoys crafting and spending time with her family. She is married to Tyler Odle, who is a Staff Accountant for Hudson Automotive Group. They reside in Bristol, TN with their dog, Copper.

Jessany joined the New Again team in early 2018 as a Content Creator. She graduated from King University in 2015 as a Snider’s Honors Fellow with a BA in Photography and a minor in Biblical Studies. She loves documenting and telling stories through photo and video, and she is thrilled to have the opportunity to do what she loves every day. In addition to working for New Again Houses, she photographs professionally around the Bristol area and helps lead worship at her home church. She is married to Ian Willis and they welcomed their daughter Penny Grace into the world in August of 2021. 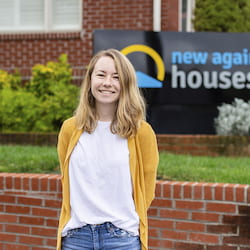 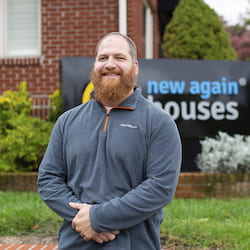 Jeremy Yanopoulos joined the New Again team in 2020. He is a transplant from Northern California, who fell in love with the people and culture of East Tennessee. Having grown up in an old mill town surrounded by redwood trees and the unsurpassed craftsmanship of the Victorian era homes, he began learning the construction trades at an early age. Upon graduating high school, he served in the U.S Navy as an electrician from 1998-2004. After the Navy, Jeremy continued to work in the construction industry while pursuing his college education. Considering a career in law, Jeremy graduated from Southern Oregon University in 2010, graduating Magna Cum Laude, and as a member of the Honor Society of Phi Kappa Phi, and the Omicron Delta Kappa National Leadership Society. After working in the legal profession post-college and deciding that it was not a good fit for him, he decided to return to his first love, building and remodeling homes. He is known for his meticulous attention to detail, and for being a “carpenter’s carpenter”. He is married to Ann Yanopoulos, and they reside in Johnson City with their three children, Gabriel, Eliana and Isabella.

Newman joined the New Again Houses team in 2013 as the Director of Marketing, and once Matt Lavinder discovered he was simply a stuffed animal, he was later demoted to Mascot. Originally from Upstate New York, Newman was previously in the entertainment industry before following his passion for marketing. When he’s not out buying houses, Newman enjoys eating berries, learning to ride a bicycle, and making people smile. 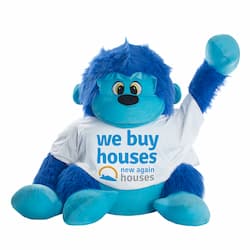